There are many reasons why drain cleaning should be a regular item on your to-do list, and bad odors are among the top. Smells coming from your drain can stink up your kitchen and bathroom, and make cooking, cleaning, and entertaining unpleasant.

However, there are multiple sources of bad drain smells, and today we’re going to talk about what they are and what you can do about them. 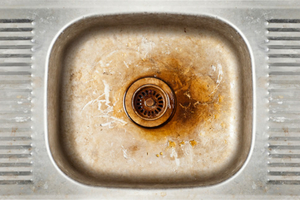 Many contaminants can end up in your drains and cause nasty odors. Kitchen drains are particularly susceptible to odors caused by organic matter.

This happens if food particles get trapped or clogged in your drains, then they can rot in the pipes and cause garbage-like smells in your sink.

But kitchen sinks aren’t the only ones that fall victim to these smells; even bathroom drains can get stinky because of hair, soap build-up, and other materials that produce odors when they decompose. Finally, any drain in your house could be contaminated with mold, and this will lead to a musty smell coming from your drains.

Another problem that can cause unpleasant drain odors is a sulfur smell, which is caused by hydrogen sulfide gas that’s created from bacteria in the sewage system.

If this gas gets trapped in your pipes, it can cause the rotten egg smell that’s the classic hallmark of sulfur.

You know that the plumber is the one to call if you have a clog, blocked toilet, leak, or other plumbing problem in the house.

But not everybody realizes that most experts in the field also perform drain cleaning services because this is a crucial step in maintaining good drain health.

This maintenance becomes especially vital if you’re struggling with mold and other contaminants that are causing bad odors in your pipes and throughout your house, so do a bit of research and find a trusted local professional who can help you with this problem.

Bad odors coming from your drains could be caused by a number of things, including food particles and other organic matter, mold, or even hydrogen sulfide gas. Dirty drains typically mean smelly drains, and regular drain cleaning can help you remove these smells and their causes.

No matter what’s making your pipes stink, a thorough and professional cleaning will remove particles from your pipes and help your kitchen, bathroom, and entire home smell cleaner and more welcoming.